In this 3rd and (perhaps?) final installment on ownership succession we continue the story of Arnold and  Bonnie Kettle (‘A&B’), owners of Ma & Pa’s, a retail housewares business. After 25 years they are finally making decisive plans to have their children take over the business. The sudden flurry of planning was hastened by their General Manager, Erica, who threatened to quit and go into competition unless offered ownership in Ma & Pa’s. Losing her would be a major setback to the business, and to A&B’s retirement plans.

Arnold & Bonnie are now intent on bringing their two children, Charlie (25) and Diane (22) into the succession conversation. And so, during a recent Sunday dinner, they announce plans to make the kids equal partners in the business. But there is a slight glitch. Charlie and Diane didn’t see this coming. Further complicating matters is the fact they don’t get along very well.

The good news is that Diane just graduated with a retail management degree and is set to pursue a career at Ma & Pa’s. Charlie, on the other hand, intends to open a music studio. His ambitions pose two problems: he expects to tap into his inheritance for money to fund the purchase of the studio, and he feels it is his right as a member of the Kettle family to own an equal share of the business with his sister.

A&B know they have some heavy lifting to do to balance the ambitions of their children, placate Erica,  and somehow find the money to retire when virtually all of their wealth is  tied up in the business.

On the Wednesday following Erica’s fateful Friday ultimatum Arnold, Bonnie and Erica sit down to talk about the future. The air is tense. Arnie begins. “Erica, I would say how much we value your contribution. You have helped us build a good business, and we have compensated you well. So we were shocked by your ultimatum. Can you let us in on you’re thinking?”

Erica cleared her throat. “Well it comes down to being recognized. Sure you guys say stuff like ‘hey Erica, heck of a job’, give me a raise here and there, even the odd bonus. But it isn’t tied to anything tangible. I just want to feel like I have a stake in the future. It is about something more than a paycheque!”

Erica described feeling isolated, with nowhere to go, as if against a glass ceiling. “I mean, I think it is fair to say that I have had a hand in your success. I have brought discipline, opened a second store, and helped grow the business! But not being family…” Her voice trailed off, choked by emotion. A&B nodded. Erica had done a good job. “Look, I like you guys, and would like to stay here, but I need to feel like a partner, not an employee.”

Erica slid a folder across the table. “I have done some homework on making this a win-win for the Kettle’s and for Erica. In a nutshell, you have three options…” Arnie and Bonnie leaned closer, eyes narrowing. “Option 1: you grant me a 25% ownership in Ma & Pa’s. That gives recognition to the value I have helped create over the last 8 years. That way I get a vote, share in growth, and get dividends. That also means I am on the hook for my share of the liabilities, debts, employee obligations and all that stuff.”

Arnold & Bonnie’s heads were swimming. What did all this mean for their retirement plans, and for bringing the kids into the business? Arnie felt resentment over Erica’s heavy handed demands. No words were spoken for what seemed a very long time. Finally Bonnie broke the silence. “So what is option 3?” Erica had been waiting for the cue. “Option 3? That would be…my letter of resignation.”

Bonnie had big concerns about how Erica and daughter Diane were going to work together, and she asked Erica for her thoughts. The answer yielded unexpected insights. “Diane has the right stuff to run this business someday. But we are headed for conflict given her career plans.” Erica expanded on the source of her frustration: “You realize that by default you expect me to teach her the ropes, which in effect has me walking the plank to my planned obsolescence.” Erica’s imagery hit home with A&B. How could they not have seen this situation coming? Erica went on to describe her belief that she and Diane could do some great things together, if they got aligned. “Our skills can complement nicely, but we need to agree on clear roles, and full accountability. It can work…but it needs to be mapped out and agreed.”

Bonnie jumped in. “Erica if I read between the lines, this isn’t just about money? You used some powerful words about recognition, communication and feeling limited by your non-family status. Sorry, but I guess we got caught up in running of the business and missed your signals. I can see how you might feel like a bit of a second class citizen.” Erica nodded her agreement. The meeting had identified some common ground. Even Arnie was starting to see Erica’s demands in a new light.

The very next day, armed with insights from the meeting with Erica, A&B convened a family meeting with Charlie and Diane. They know they are entering uncharted waters, so at the suggestion of their accountant they have invited a family business advisor by the name of Maddy McCrea to facilitate the meeting. Maddy starts by drawing three circles on the whiteboard. 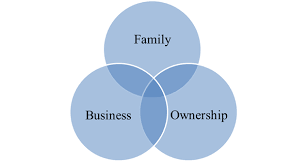 She begins. “The issues that a family faces when trying to transition a business come from three major relationship factors. The factors at work in these circles are constantly intertwined and give rise to tensions that, when not managed properly, lead to communication breakdown, and patterns of avoidance. Sound familiar?”

“So Bonnie when you propose making Charlie and Diane equal partners in the business, are you saying that as their mother, boss or business owner?” Bonnie wasn’t sure where Maddy was heading with this, and took a few moments to gather her thoughts. “Well, as their mother I raised them as equals in pretty much every way. Why should that be any different now?” It was Maddy’s turn to speak, but she too took her time. “So Bonnie, as boss, would you treat two employees as equals even if one had more responsibility, or was clearly more competent than the other? Could it be that applying your family principal of equal treatment to matters within the business may be a way to avoid a difficult but necessary choice?” The room went silent.

Maddy continued. “So along comes Erica, who demands an invite into the ownership circle, and the plot  thickens. Meanwhile Diane is poised to enter the management circle…low and behold we have another source of tension! And now you want to invite Charlie into the owner’s circle where it seems he simply may not belong. Doesn’t this really come down to how the Kettle family manages and differentiates the boundaries between family, business and ownership, and its core values as a family?”

So where to from here? There is no one right solution, but here are some possibilities:

Change Lanes. Charlie and Diane are on a collision course, and the result won’t be pretty. Rather than forcing them into what will be a perilous partnership, A&B would be wise to consider consolidating family ownership with Diane.  Better to confront this reality now than have to deal with poisoned family and business relationships down the road.

Cut a Deal with Erica. Erica has presented two deals for consideration. Arnold & Bonnie should negotiate in good faith to reach agreement with her on becoming a shareholder or holding a stake in long term value creation at Ma & Pa’s. Having her as a partner will go a long way to aligning their interests, not to mention having a mentor for Diane. They should do a deal, but take the time to get proper advice to ensure the terms are fair and balanced.

Deal at Arm’s Length. No family discounts or special deals! Charlie, Diane and Erica should be treated as if at ‘arm’s length’ by A&B. This means selling the business to Diane (and Erica?) at ‘fair market value’, and structuring a payout over a set number of years from the profits of the business. If Charlie needs help financing his purchase of his music studio, A&B could mortgage the store property and lend him money at market rates. This way both Charlie and Diane know that in the end they will share equally in their parent’s estate, and will know that they have been treated fairly along the way.

Keep Communicating. Trust & communication are the foundation of successful transitions, and the Kettle’s need to establish a more structured approach to communication now and going forward. This could entail holding regular family meetings to ensure everyone is on the same page regarding estate and financial matters.  In addition an owner’s council for the business could also be formed to serve as a forum for Arnold, Bonnie, Diane and Erica to stay up to date on trends and developments. After all, Arnold    and Bonnie will have their money at risk for some years while Diane and Erica pay them back.

When it comes to succession, what measures should be used to gauge success? A study by the Williams  Group looked at 3,250 families and found there was a 70% failure rate when transitioning from one generation to the next. They defined failure as the erosion or loss of wealth under the control of the beneficiaries.  Perhaps the most telling aspect of Williams Group study was the finding that 85% of the failures were due to breakdowns of trust and communication within the family unit. Only 15% of the transition failures were due to ALL other causes such as tax, legal, financial mismanagement or faulty planning.

The message is clear: if a family wants to improve their chances for a successful transition, there is no better investment than in the discipline of good communication.  Sure, the conversations aren’t always easy. But they certainly are worth having.